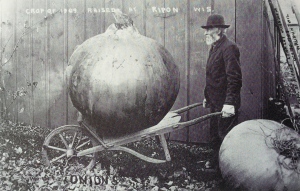 (from LARGER THAN LIFE: THE AMERICAN TALL TALE POSTCARD, 1905-1915, by Cynthia Rubin and Morgan Williams)

Maybe. But that’s not where I’m going.

My summer reading (and listening) has lately brought me back to TWO METAPHORS for writing, and both have been sloshing around in my head for days, like so many more accidental infusions of pool water.

The first one turned up in David Almond’s middle years book, My Name is Mina. Towards the end of the book Mina — the narrator/diarist — and her mom go for a walk, and talk about Paul Klee’s idea about WALKING and how it relates to his art.

Her mom tells Mina that Paul Klee says “drawing is taking a line for a walk”. Mina extrapolates that writing isn’t so different from drawing. “Each word is a step a-long the way to I don’t know where.”

She continues, in a sort of marching song:

“To write is to take some words for a walk.

To write is to take some words for a walk.”

To geek-out and get a wee bit academic, the Klee/Mina notion of a walk reminded me of the Situationist Internationale and Guy DeBord’s idea of the dérive which — no surprise — I’ve always loved. For the Situationists — a group of avant garde intellectuals and artists active in the mid 1900’s — a dérive was a sort of open-ended and open-hearted wandering — not about work or recreation or reaching some goal, but all about exploring and having new, unexpected experiences. (The Situationists posited it as an antidote to the monotony of daily life in Capitalist culture — which is a whole nother conversation.)

Anne Lamott (I’m finally reading her fabled Bird by Bird ) and others have commented that a great perk of being a writer is having a standing excuse to get out into the world and explore. Amen! Like writing, any walk — weather a dérive or not — can show you things and bring you to places that weren’t on your original itinerary. Arrival at the unexpected is one of the great joys of both enterprises. And there are aspects of walking (as opposed to being in a car, especially) — the slow speed, the immediacy of smells and sounds and visual details — that involve a sort of presence that writing, especially free writing, offers too. 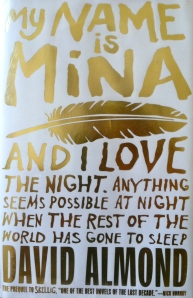 My second metaphor for writing: BEING A PARENT.

Terry Gross interviewed Richard Linklater on Fresh Air a couple weeks ago about about his new film, Boyhood, and talking about the film’s father character (played by Ethan Hawke), Linklater told Gross “…he’s trying very hard, but… he’s kind of bumbling through parenthood. He’s figuring it out. Kind of endearingly, self-consciously. And I just think he’s trying, which as a parent that’s so much of the game. You know, just to try. We’re all gonna get it wrong anyway but you have to at least try.”

I laughed out loud at that one: welcome to what writing is like too — for me anyway. But there is the lesson: just try. Like that admonishment that you read in every writing book and hear from every working author: just write.

Just being a parent and just writing share lots: you bumble through both; both can be really lonely in their ways (especially when you’re just getting started); the characters involved repeatedly assert their own agendas despite your wishes; and both jobs — once you sign on — you can never (god forbid) quit.

Tangentially: I did end up going to see Boyhood the other night too. It’s the story of a kid growing up in a complicated, modern family in Texas. Linklater filmed over 12 years, using the same actors throughout. Its whopping 166 minutes somehow didn’t seem long enough: I haven’t so wanted for a movie not to end since escaping into Avatar in 3D.

It was a gift to be able to watch kids morph and change over that kind of time frame on the screen. The movie is not plot-driven at all, and you end up recognizing its many small moments as both all-important and no big deal. A bit of bullying, say, might elsewhere become the linchpin for an entire storyline; but here it is just one moment — something that happens. (A nice reminder to sit back a little in an age of problem-oriented “parenting”!) And at the same time, all the small moments — their accumulation and overlay — are exactly what make up a life. Nevermind the great narrative arc.

It is a pretty special movie — definitely worth the 3 hour commitment.

One of my oldest and dearest friends recently welcomed two new children into her family: five and six year-old sisters who came through a state foster care system. If all goes according to plan, they will be fully adopted within the next two months.

The whole brood (my friend, her 12 year-old step-daughter, her husband and the two girls) recently spent five days with us in central Pennsylvania, en route to New York City  (the girls’ first trip out of their home state, and their first time on an airplane too). While here, my friend read the girls Roald Dahl’s James and the Giant Peach. 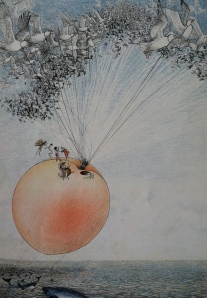 Intentionally or not, the book offered a way for them to begin to imagine that great metropolis where their trip would end, and by the time they left us plans were in the works for a visit to the Empire State Building (I also suggested they try to visit the peach pit sculpture in Central Park. Whoops! The aging brain at work again: there is apparently no such thing. But really. If Hans Christian Andersen gets a bench, and Alice gathers her crew around a cluster of big, bronze mushrooms, why not a habitable peach pit?)

The girls’ paths so far, as one would expect, have carried them through complex territories, inhabited by adults whose impact – good and bad — they will be making sense of for the rest of their lives. I couldn’t help wonder, after they left, about what sense they made of the parent-less James, and of Aunt Sponge and Aunt Spike, those vile old child-hating aunts. 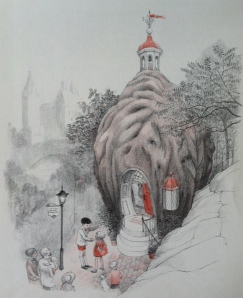 Most Dahl grown-ups are either all good or all bad — like characters in fairy tales. In Dahl’s stories though, the good and the evil live much closer to the here-and-now than the fairy godmothers and wicked stepmothers of days gone by.

In James, Dahl’s first book for children, there are only bad grown-ups (save for James’ parents who we know only in their absence). Spike and Sponge dominate the first portion of the book, and even the barely-present little guy who gives James the bag of green wigglies is a bit of a creep.

But, there are good bugs. Centipede, Grasshopper, Ladybug, Silkworm, Earthworm, Glow-worm and Spider are full of idiosyncracies and foibles but, at the end of the day, all win sympathy. Dahl seems to be freed up by this cast of critters — by the fact that they are not human — and he ironically grants them much more humanity than his good and bad human adults. The Peach’s oversized inhabitants are so much more nuanced than, say, Matilda’s father, or Miss Honey, or even Charlie’s lovely grandfather.

For my friend’s two new daughters — and for their whole family — the journey is not, right now, about finding a prince or slaying a dragon or freeing a trapped unicorn. It is about growing trust and about forging connection and about becoming part of a forever family. And I love the idea of their discovering one roadmap for this quest in an improbable story about a boy working his way into a quirky new family of giant, mismatched bugs in the belly of a juicy, oversized fruit — floating across an unimaginably vast Ocean through a world of Cloud-Men, rainbows, seagulls and sharks.

Walter Dean Myers, in his own words and what he hoped his legacy would be.

A natural history notebook and joint project of the Missouri Botanical Garden and the Restoration Ecology Lab at Virginia Tech.

Lauri Fortino's Frog On A (B)log

Sharing and Celebrating Picture Books Since 2009

The art of story.