The first book that finally did spring to mind was Skippyjon Jones, by Judy Schachner. I’ve always felt some ambivalence about that cat’s voice (check out some of the debate around it here and here), but there is no question that the playful humour and rhyme are regular kid-pleasers. As I struggled to come up with more examples I began to wonder whether first person narration was something of a no-no in picture books — or at least hard enough to pull off that you don’t see it much.

I put a call out for other examples on the Facebook Group of Julie Hedlund’s 2015 12 x 12, and folks there offered up a few more: Judith Viorst’s And Two Boys Booed; John Rocco’s Blizzard; Sam Garton’s I am Otter; Sandra Howatt’s Sleepyheads; Karen Beaumont’s I Ain’t Gonna Paint No More;  and Jon Klassen’s This Is Not My Hat (I was a little embarassed to have overlooked this favorite!).

Some lists emerged too: one from nancykeane.com and another from msrosenreads.com. I’ve consolidated them here, and added a few more titles that I found on my shelves too.

The titles I know and am drawn to (full disclosure: I am still one-footed so couldn’t make it to the library to look into the titles I don’t know), seem to fall into one of two categories: in the first, a child (or child-like) narrator — strong-willed, high-intensity, and very focused in his or her desires — tells the story. These are what I would call “spirited” books in the sense that they tap into main arteries of kids’ strong physical and emotional selves: goofiness, petulance, guilt, frustration and, again and again, desire for control — especially of their food. We hear kids own voices LOUD AND CLEAR in what tend to be true ‘picture books’, where the text very much relies on the illustrations to tell the stories.

The second group has a more traditional, old-fashioned feel, with narrators who seem more adult reflecting back on childhood incidents, memories, etc. More like traditional, ‘illustrated story books’, they tell tales of bygone childhoods from the perspective of a nostalgic adult-who-was-there, in voices gentle, reflective and wise.

A cluster of Christmas/Channukah books fall into this category — Patricia Polacco’s Tree of the Dancing Goat; Chris Van Allsburg’s Polar Express; Clement Moore’s classic Night Before Christmas — which makes sense, given the nostalgia so many of us feel towards the holidays. 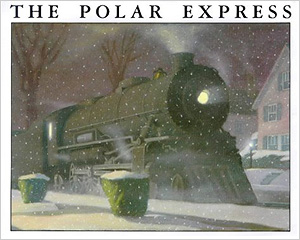 In addition to the distinction between ‘child voiced’ and ‘adult voiced’ stories, a few other patterns emerged. First, the list includes a number of stories about children and people who have historically been marginalized and have taken longer to find their way into books for children. In these stories, first person narration effectively pulls a listener in and places them squarely in the storyteller’s shoes — removing the distance of “otherness” that differences in race, nationality and life-history might otherwise engender. It’s an effective strategy, and at the same time seems to underscore a sense that it is well past time for these voices to be heard and to find their rightful place. 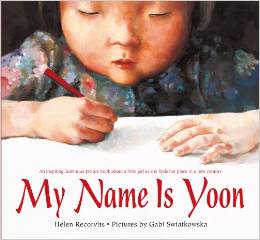 And, of course, there are the tall tales (which I’ve written about at length, previously). The first person voices in many of these stories exaggerate and fib and stretch the truth in every possible direction, with a folksy, charming, country vernacular that really is unique to the genre. 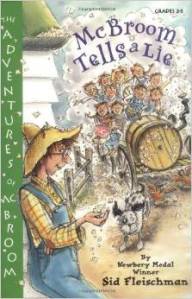 I have such a soft spot for tall tale narrators, but in answer to the question of my own all time favorite I have to go back to one that I read over and over and over again as a child (I even plagiarized it — unwittingly — in a poem I later wrote at a Girl Scout camp-out).

I still own my original, yellowed, crumbling 1968 Viking Seafarer paperback copy of Marie Hall Ets’ Play With Me. This book so totally spoke to me as a child that I’m thinking that its nameless protagonist takes the prize. No matter that that little girl’s voice was more a whisper than a shout: I could still hear it.