My kids — now 10 and 12 — LOVE graphic novels. And as the children’s book field explodes with great titles in this format, it is no surprise to see more and more picture books using the graphic conventions of comics as well: serial imagery, speech bubbles and the like. Maurice Sendak is often cited as the first, notable author-illustrator to introduce the low-brow graphic conventions of the comic book into the righteous and upstanding world of children’s picture books — with Hector Protector & As I Went Over The Water (1965, Harper Collins), In The Night Kitchen (1970), etc. Like much of Sendak’s work, this adaptation of comic strip conventions was viewed as bold and transgressive — especially in light of mid-century mores that questioned the morality of comic books (check out the mid 1950’s Senate Subcommittee Hearings on Juvenile Delinquency).

A recent project got me wondering about picture books that interweave straight narration with embedded bubble-dialogue, and so I did a quick survey of the field to see what’s out there and what sorts of issues come into play when authors and illustrators combine the two. Given how dialogue and narration ostensibly set up very different sorts of rhythm, I found myself paying a lot of attention to flow and cadence as I looked at these books.

There is a whole batch of books that stick primarily with narration, inserting occasional, short speech bubble dialogue here and there in the illustrations: Tor Freeman’s Roar (2002, Candlewick), Mo Willem’s Knuffle Bunny books (Hyperion), Colin McNaughtons’ Suddenly (1994, Harcourt) and  Oops (1996, Harcourt). In all of these books, relatively traditional narrative storytelling is punctuated with small bits of bubble text that offer these sort of staccato punches within the overall rhythm of the narrative. (Agee’s Terrific (2005, Scholastic) has just a single word in bubble dialogue (“TERRIFIC!”) — on the book’s final page.)

Picture books written entirely in speech-bubble dialogue without a stitch of narration sit at the other end of the spectrum. One challenge of going with straight dialogue in books for young kids might be to find ways of dynamically illustrating two characters simply talking. Luckily though, young children (and animals who behave like them) don’t speak primarily with their mouths like many of us older sorts: the full-bodied engagement of the characters in Mo Willem’s Elephant & Piggy series (Hyperion), his Don’t Let The Pigeon Drive The Bus books (Disney-Hyperion), and Dev Petty’s I Don’t Want to Be A Frog (2015, Doubleday) are all plenty dynamic. These authors do a great job, too, of manipulating the rhythms of the dialogue’s back-and-forth to create tension and energy. Adam Rex’s PSSST! (2007, Harcourt), John Rocco’s Blackout (2001, Disney-Hyperion) and David Weisner’s Mr. Wuffles (2013, Clarion) show clearly how also adding serial imagery to the mix can also replace narration. (For the younger set there are quieter, simpler books too, like Laura Vaccaro Seeger’s Bully (2013, Roaring Brook) and Jez Alborough’s Hug (2009, Candlewick).)

Between the books that use occasional bubble-staccatos and those that use nothing but bubble dialogue are many that alternate or combine the two more evenly — books like Susan Meddaugh’s Martha Speaks (HMH Books For Young Readers) books, and a whole bunch illustrated by Harry Bliss: Doreen Cronin’s Diary of a….. books (HarperCollins), Bliss’s own Bailey books (Scholastic), William Steig’s Which Would You Rather Be? (2005, HarperCollins), and Robie H. Harris’s Don’t Forget to Come Back! (2004, Candlewick).

Chris Barton and Tom Lichtenfeld’s Shark V. Train (2010, Little Brown) is an interesting one in this group for offering sparse narrative text but, at the same time, holding together well even when you ignore the bubble dialogue entirely (try it!) — at least until you get to the last two spreads. The bubble-dialogue, here, mostly elaborates on the conflict and emotion that is already boldly communicated in the book’s illustrations.

Aaron Reynolds and Matt Davies’ new Nerdy Birdy (2015, Roaring Brook Press) doesn’t use actual bubbles for it’s dialogue, instead opting to distinguish dialogue with a hand-written font and quotation marks, though the idea is much the same. Some spreads mix dialogue and narration while other page-series are either all dialogue or all narration. In one spot the dialogue is even given dialogue tags in the narration font — so it’s a bit of a mash-up. In any case:  the two work together to effectively tell a story that is all about social dynamics. 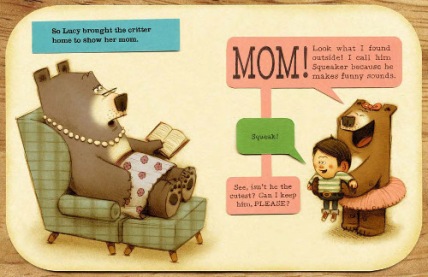 A Hornbook Calling Caldecott post in 2013 raised questions about how bubble dialogue and the other graphic conventions of comic books fit into the picture book format and how to talk about them in the awards-making process. It seems clear that the floodgates have opened — and to great effect. It should be fun to see what else swims through in the future. 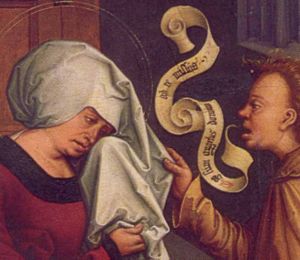 … and lest we think of bubble dialogue as a completely modern convention, check out this 1506 Bernhard Strigel painting. (Wikipedia, “Speech scrolls”)

A natural history notebook and joint project of the Missouri Botanical Garden, the Ecological Health Network, and the Restoration Ecology Lab at Virginia Tech.

Sharing and Celebrating Picture Books Since 2009!