I am a junk shopper. A user of used things. An enthusiast of thrift. Like most people, I’ll never argue with a bargain, but my inner-Scot is really not the main driver when it comes to shopping used.

Newness is a must for certain things (swimsuits, underwear, etc.), and the convenience and predictability of what you find in regular stores is inarguable. By contrast, at an emporium of used stuff you rarely see the same thing twice. You can’t go in looking for anything too specific, and you have to enter the process with an open mind. Merchandise there lacks crisp, packaged anonymity; every item has a history — and in that history there are stories, real and imagined.

In my junk shopping I watch for old photos to use as writing prompts and inspiration. My latest, obsessive craft project involves felting old wool sweaters so they’re a current quarry too. And always, there are books, especially — of course — children’s books.

I regularly find used children’s titles I’ve never seen before, and no matter where a book falls on the overall “greatness” scale, it usually offers inspiration ripe for the repurposing and, as often, delightful glimpses into the history of the field.

I recently came across a trove at Benton Antiques in central PA.

The Runaway Squash (1976), a Little Golden Book story retold by Gale Wiersum and illustrated by Bunky, gives a new (old) twist to that folksy, pumpkins-run-wild/pumpkin-profusion theme that shows up in various autumn favorites (Too Many Pumpkins, by Linda White, Megan Lloyd ill.; Pumpkin Town!, by Katie McKy, Pablo Bernasconi ill., etc). This was the first time I’d encountered  a member of the squash family growing so fast that the kid who planted it had to hold on for dear life as the thing tore across the land and overtook everything it touched. I’ve had fun mulling the pumpkin-as-bucking-bronco and pumpkin-vine-as-vehicle mashups.

I’ve long loved Harper’s “I Can Read Book”s from the 60’s and 70’s, so Leonard Kessler‘s Last One In Is A Rotten Egg (1969, Harper & Row) jumped out at me. I did a double-take when I saw that the cover features an inter-racial group of kids — in a pool no less — at a time when kids books were just beginning to diversify (not that they ever made it that far).

I found Kessler with the help of the generous folks at Purple House Press, who reissued some of Kessler’s out-of-print books, and connected with him through his daughter, Kim. Kim asked her dad about the book’s inclusiveness and whether it had been an issue. She reported back, “He said his editors simply said, it is your book, you make the call… he just felt strongly that his books should reflect real life, and that meant people of all different colors.” His rationale is perfectly straightforward and sensible — while the editorial climate he describes seems unimaginable.

Karla Kuskin‘s Alexander Soames: His Poems (1962, Harper & Row) is written at that same early-reader level. Alexander tells his mother “I prefer to speak the speech I speak in poems,” and his mother balks, trying to get him to STOP speaking in poems (never mind that she rhymes a fair bit herself — and not at all ironically). The book drags in the middle as the mother character repeatedly sets Alexander up to speak short, sweet poems, yet there is something so compelling — and right — about the idea of a child character who speaks this way — playing with words and just speak-loving language as we tend to hope kids will.

And, there was this little gem, The Little Boy with the Big Horn, (Jack Bechdolt, Aurelius Battaglia ill.) — which belongs alongside my favorite other Karla Kuskin title, The Philharmonic Gets Dressed (1986, Reading Rainbow Books, with Marc Simont ill.). Mid-century Illustrator Battaglia‘s work in this book blew me away (scroll through this great, graphic-filled tribute to see more). The farmer character’s voice made me laugh out loud too: “Drat. The old muley has fallen into the ditch again.” “You can’t play the horn here. It’s enough to sour their milk.” 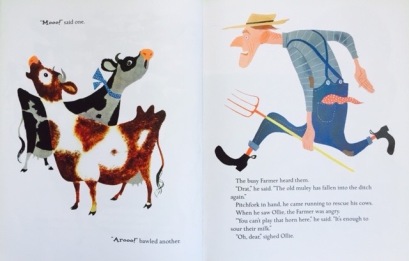 Since I’ve landed on a book about a kid with a horn, I’ll end with a musical tribute. Scott Bradlee’s great ragtime cover of Macklemore’s “Thrift Shop” makes a better (and more apropos!) case for the fertile and generative pastime of “thrifting” than I ever could.