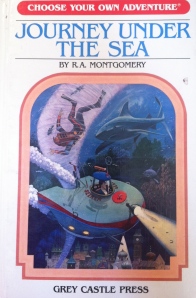 The one CYOA book that we own because — you know — the SEA….

Remember the “Choose Your Own Adventures” books? The man credited with turning them into the phenomenon that they became — R. A. Montgomery — died on November 9. Given that there were several different authors in the series (all of whom were actually credited, contrary to the standard practice for series like the Warriors books “by Erin Hunter”, or the Nancy Drew books “by Carolyn Keene”), the CYOA books were literary to varying degrees — not that high-brow literary was ever their main thrust. Kids love reading the books again and again for exactly the reasons Montgomery and the first book’s writer, Ed Packard, conceived of them: they heighten readers’ sense of agency and involvement in story. They “allow the reader to become the participant.”

Montgomery’s death and the obituaries that followed have carried reminders of the theory behind the books (this obit at the CYOA website provides great biographical background; another at obitoftheday.com riffs on the books’ format). In Montgomery’s 2010 interview with video game critic and historian Matt Barton, he shares much of his thinking too.

Montgomery began his working life as an educator, exploring gaming as a way to reach kids who were struggling with what he viewed as “rote, assignment-based and punitive” methods of teaching. Through gaming, he sought to involve kids more directly in their own learning and break down their resistance.

He went on to study game theory and simulation design. The way Montgomery saw it, task-oriented, goal-driven simulations and role play — well before they became the stuff of on-line and video gaming — have permeated various fields of study and learning for ages: architects build models of buildings, boat designers test hull shapes in wave tanks, law school students engage in mock trials, and when you learn CPR you pound the chest of a plastic dummy. The list goes on and on. And really: what is a young child building with blocks doing, if not testing her understanding of the world and how it works?

So, why not apply the same ideas to books? Montgomery said of CYOA, “It’s finally saying to you: you’re involved… making choices… Implicit in the choice is an ethical or moral approach or decision, but that is never spelled out, and it is never sold… It’s just an exciting way of getting people involved in their lives. And I had always hoped that this would make some profound changes in the way that people make decisions about their lives, about the lives of their children, about politics [and] all the rest. And I’m still very optimistic about that.” He continued, “I think all these gaming situations open up a world to people — whether they be kids or adults — that allows them not just to fantasize, but to indulge in exactly what CYOA does, which is to pretend without the risk of the real world. To try stratagems out, to develop an approach…”

We have a family game that we learned somewhere which consists rallying questions back and forth that share this basic structure: “Would you rather be a _____ or a _____.” (spoon or fork? english muffin or table? cat or tree?). The idea is to answer quickly and intuitively. And then explain your reasoning. (The William Steig/Harry Bliss book Which Would You Rather Be? emerged from this same game, I think). We’ve been playing it since our kids could first string words together, and the range of thinking behind people’s choices never ceases to surprise.

The CYOA books’ second person narration demands — repeatedly — the seemingly simple act of making a choice. “You are a _____. If you decide to “A”, turn to page ___. If you want to “B”, turn to page ___. ” Like it or not, you are the protagonist. Your choices are, of course, limited to just A or B. But really, how often aren’t your choices in life limited (aside from when you’re staring at a blank screen or page… ahem). Being permitted and required to choose as part of the act of reading, you help construct a story. And at the end of the day, the act of making choices — of being conscious and mindful about how and why we opt for this or that alternative — is integral to being human and to constructing the narratives of our own lives.

Whether Montgomery’s wish for the books to ‘change the way that people make decisions in their lives’ has panned out or not, I don’t know. But the books definitely do encourage children to make decisions, again and again and again, and I can’t think of anything bad about helping kids strengthen the sense of their own agency — in lives real or imaginary.