Check out this nice little piece posted in The New Yorker yesterday by Ruth Margalit: ‘”The Giving Tree” at 50: Sadder Than I Remembered’.

It’s nice to revisit another book that does not adhere to all of the ‘what makes a good picture book’ rules. In the case of The Giving Tree, the ‘co-dependence’ read does cast a bit of a pall. It’s a valid interpretation, though I’d warrant that a conversation about the story with kids would be much more interesting.

Kids can handle ambivalence and not-so-happy endings. And, of course, the lucky ones are familiar with people who do a lot of giving; we can forgive them for not having worked out the imbalance piece, even as we help them understand it. But reading about Silverstein’s life — his involvement with Playboy and the like — also got me thinking about misogyny in the kidlit world. Having recently watched the somewhat disturbing preview of  Far Out Isn’t Far Enough: The Tommy Ungerer Story, I was already mulling the issue.

(Do you suppose Ungerer and Silverstein ever palled around together?) 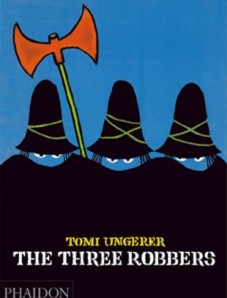 There’s no reason that the world of children’s literature should be — or have been — immune from this sort of stuff. But I am definitely going to have to work at it a bit if I want to love Crictor and The Three Robbers as much as I used to. And this not even having seen the full film yet…